A few notes on my life beginning on a Tasmanian farm, developed through academic work at Melbourne, Harvard and ANU, ministry in the Uniting Church in Australia, and through marriage and family in Melbourne, Canberra and overseas.| To search this site go to DB Home | Contact DB | 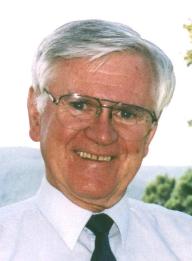 My professional background is a mixture of ministry in the church and academic work in psychology and education. I am a retired minister in the Uniting Church in Australia, and Professor Emeritus at the University of Melbourne where I have an honorary appointment as Principal Fellow in the Melbourne Graduate School of Education, and as a Fellow of St. Hilda's College. I have continued some part time ministry in the Church, assisting or giving interim ministries in some local churches and formerly in ministerial education. I have served for limited periods in retirement as interim presbytery minister of the Western Port Presbytery (2000) and Maroondah Presbytery (2001) having pastoral care of ministers in the outer eastern and south-eastern suburbs of Melbourne and nearby country districts. Developing my web site, particularly in regard to lectionary resource for preachers and workship leaders, and in family history, has been a special interest in retirement. Other community interests are represented by my having been a member of the Ethics Committee of the Royal Australasian College of Surgeons for over ten years. Since 2001 I have been engaged primarily in research and writing in my original discipline of psychology.

I retired from active ministry in the Uniting Church on 31 December 1997. From November 1994 I had been minister of the Templestowe Parish, Victoria and Tasmania Synod. At the end of 1988 I had taken early retirement from my former academic position as Director of the Centre for the Study of Higher Education in the University of Melbourne (1976-88) to return full time to my original vocation as an ordained minister, and served as Presbytery Minister of the Gippsland region of the Uniting Church 1989-94. I have been a member of the Council (governing body) of the University (1996-7), and Professor Emeritus since 1989. With my late wife, Joan, I moved from the Melbourne suburbs about one hour's drive East to the Upper Yarra Valley to live in retirement in a rural environment at Wesburn, between Yarra Junction and Warburton. Sadly Joan died in April 2001. (See Joan's memorial service history and tribute.) We still had a base in Melbourne where we maintained a range of interests and contact with three of our four adult children and their partners. We had to go a little further to visit our daughter, son-in-law and four grandchildren, at Port Fairy, Vic. Three of those young people are now living and attending universities in Melbourne. I now have four more grandchildren: two born to Andrew and Paula in 2002 and 2004, and two to Robert and Catherine in 2007 and 2010. I have one more grandson living in UK. In July 2002 I was married again - to a long term friend from England I met in the US in 1958, Hazel Williams, the widow of a colleague in ministry - see our wedding invitation Celebrate with us! for some some of the background. We are now living in Melbourne and have 17 grandchildren between us. See our Christmas greeting for 2007.

Born at Derby, Tasmania, in 1933, I was the eldest child of Richard Beswick (1905-77) who came from an old Tasmanian family who were pioneers of mining and farming in our district, and his wife who was born Kathleen Jessup (1907-93), also from pioneering farmers, and who had been a teacher before she married.

I attended state high schools at Scottsdale and Launceston, Tasmania, and after working for two years on the farm went to the University of Melbourne, resident in Queen's College as a candidate for the ministry of the Methodist Church. During this time (1953-58) I developed a lasting interest in psychology and finished up graduating with honours and a Masters degree in that discipline while doing basic studies in theology, and then went on to Harvard (1958-61) with a Fulbright award to do my PhD in social psychology with concentration in personality research.

Through the church youth organisation I met Joan Green who worked in the Methodist Young Peoples Department. We married in Melbourne in 1957. Our first child, Robert, was born at Boston, Mass., and the others, Helen, Bruce and Andrew, at Geelong and Mornington, Vic., after we returned to Australia. My PhD thesis on curiosity was completed during this time after I was ordained and while I was working in the church as a parish minister (1961-66). I returned to academic work teaching psychology at the Australian National University in Canberra at the beginning of 1967.

To understand where I am coming from it would be helpful to have some idea how it is, for those of us with a traditional understanding of ordination, that the idea of advancing in a career can be incompatible with a vocation to ministry in the church. I lived with some degree of tension between vocational service and professional achievement for more than 40 years. My academic career at ANU and Melbourne, 1967-88, certainly gave me a sense of achievement, beginning in psychology and moving to educational research and administration, but I never regarded it as my true vocation; yet, much of the time I felt more at home in the university than in the church. I always remained under the discipline of the church in the ordained ministry and looked for ways of maintaining active involvement on a part time basis and I remained available to the church when I was otherwise employed.

There is a brief biography in Who's Who in Australia. A statement for the University gives an overview of my academic background and administrative experience relevant to my serving on the Council. There is more detail in an academic CV and list of publications prepared near the end of my time as Director and Professor of the CSHE in 1988, and although it covers the periods in which I was in the Department of Psychology (1967-71) and the Education Research Unit of the Research School of Social Science (1971-76) at the Australian National University in Canberra, as well the period back at Melbourne (1976-88), it concentrates on the work that was then recent. For current research see Psychological Research on this site.

I took early retirement at the end of 1988 in order to return to ministerial work full time and served as Presbytery Minister having pastoral responsibility for ministers in the Gippsland region of Victoria (1989-94). My ministerial profile which was prepared for a possible move in 1993-94 gives another view of who am. I am not especially proud of the perhaps too contrasting portraits from different perspectives in those documents, and I hope some day to give a more integrated account of this one life.

In my recent work in the Graduate School of Education at the University of Melbourne 2000-2009 I have returned to my original discipline of psychology picking up again work on curiosity, and intrinsic motivation more generally. I am writing a book on "Cognitive Motivation".

Who is this character, David Beswick? Sometimes I wish I knew. If I were to write an autobiography, which I might some day, it would need a title somewhat along the lines of A J Cronin's Adventures in Two Worlds. When I officially retired I looked back over a working life which had been divided about equally between two quite different professions and groups of people who scarcely ever overlapped between church and university spheres. My different worlds once belonged together, and perhaps the sacred and the secular will again be combined in a different form some day, but from our position today, it is an enormous change since dons were clerks in holy orders. Ironically, although I have some nostalgia for the culture of monasteries and ancient college communities, I have always worked for change and usually have welcomed it, though not indiscriminately.

My interests have ranged from tough minded quantitative research in psychology and education to what I hope has been inclusive and supportive pastoral care, from preaching in traditional terms, sometimes speaking out with conviction on controversial issues, to many doubts and fears, from active political engagement to a dreamy contemplative life and love of music, poetry, wildflowers, bushwalking and photography, from isolated rural communities to some of the great cities of the world. Yet, while there has been much conflict between groups and ideologies in my environment, and while I might have felt pulled in different directions, I was not been divided within myself; nor did I see any basic conflict between my fields of study or in general between rational objective knowledge and living with the mysteries of life and faith. I wrote a brief reflection on my ministry in relation to an academic career and church experience for Norman Marshall's collection Forty Years On which he edited for a reunion in 1992 of former ministerial candidates of 1952. It has been updated for Fifty Year On in 2003.Another perspective on my experience of the Church is entitled A Story of Hope and Grief. It was published, late in 2000, in a collection of personal "stories" edited by Hugh McGinlay entitled Joy Pain: Belonging in the Uniting Church, published by Uniting Education.